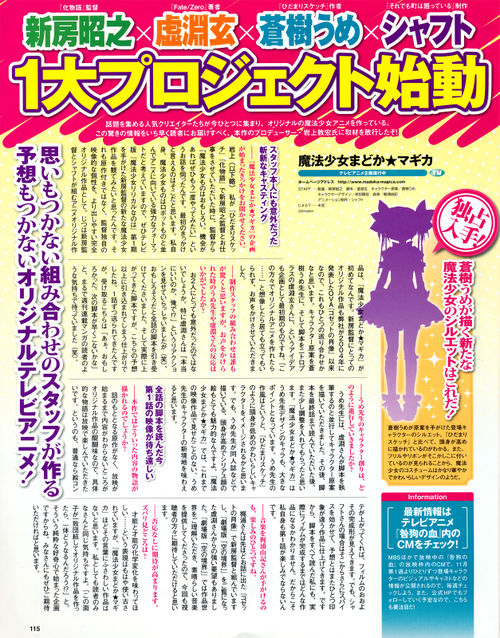 “EVEN STAFFS THEMSELVES ARE SURPRISED"

The event that could be called as the beginning is probably when I was working with director Akiyuki Shinbo on Hidamari Sketch and Bakemonogatari; he told me that “magical girl series are fun, if there’s any chance, I want to do it once more”.

Personally, I believe magical girl genre is on the same class as robot genre as anime medium, so I want to see a magical girl series by director Shinbo that worked on the first season of Magical Girl Lyrical Nanoha once more. This time without adapting an existing work, but as an original series that could let him express his unique style even easier.

In fact, this is the first original anime series that will be made together by director Shinbo and Shaft. Even though director Shinbo alone released Le Portrait de Petite Cossette with us back in 2004, I think this may be some kind of fate.

Asking Ume Aoki-sensei to do the original character design and have Nitroplus' Gen Urobuchi-san do the script was what we originally planned from the beginning. Even imagine what would become if we let these staffs work on an original series make me unable to sit still, so I ask them to participate.

I believe everyone are surprised at these staffs, but what about Ume-sensei and Urobuchi-san reaction when they were asked to participate?

I think they're also surprised, especially Urobuchi-san who responded with “is it really fine to have me do it!?” (laughs). He is pretty excited for the project, so he decided to provide a script for all episodes by himself.

As for his script that was finished for each episode are far more attractive beyond my expectation, I thought “that was fun, why don’t a script for the next episode come faster” as I finished reading each, just feel like I'm a reader of magazine-serialized manga (laughs).

How was Ume-sensei’s character design being done?

If we talk about Ume-sensei’s designs, what would come up first would be the cute, low height ratio characters used in Hidamari Sketch. For Puella Magi Madoka Magica, she will use her higher height ratio designs with more serious face often used in her Doujinshi. I think you will be able to taste a different taste than what normally found in her animated series.

“Can’t wait for the first episode even after finished reading all episode scripts” What the story will be about for this series?

I think for an original series without any original work as basis, not knowing what the story will be about until broadcasting start is its true charm. So for the story, please look forward to the actual broadcast.

Normally, it’s not hard to imagine how the episode will looks like after the storyboard is up. However at Shaft, they will add lot of finishing touches to the work, making impression for an episode different from what is on the storyboard.

That’s why even me that already finished reading all episode scripts can’t say what it will end up like. I can’t help but to look forward to the first episode. The fact that soundtracks will be done by Yuki Kajiura is also worth looking forward to, isn’t it?

Kajiura-san worked with director Shinbo on Le Portrait de Petite Cossette mentioned earlier, and is also Urobuchi-san earnest wish to have her participate after watching Kara no Kyoukai.

She provided splendid music from her understanding of Kara no Kyoukai world, so I think viewers can put an expectation for her work in this series as well. With the raising expectation, what is the main highlight of this work?

To see a reaction between talent and talent worked together… is already a hackneyed phrase, but I don’t think there’s any saying that fit Puella Magi Madoka Magica better than that.

I share the same feelings as readers of this interview, as in “what if we let these staffs work together in an original project, what will come out of it!?” After all, this project started from that innocent curiosity. So please look forward to it.

Translator comment: Starts January 2011. Definitely my most expected show since Bakemonogatari announcement back in 2008. I have high hopes for this, though Shaft will surely disappoints me once again.